The identity of Jesus Christ is an area I am researching extensively.  Where is the written record of him, other than the bible?  Before we can answer this question, let's take a look at something that was occurring near the "time" of his life.  It was the power struggle between Rome and Egypt.  Cleopatra VII and Caesarion were the last Pharaohs of Egypt.   Julius Caesar was the father of Caesarion.   Here is what they all looked like according to ancient art: 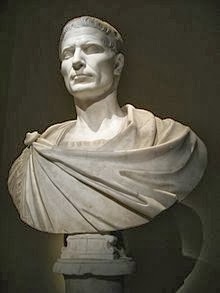 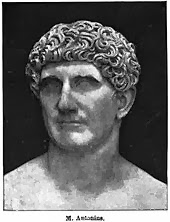 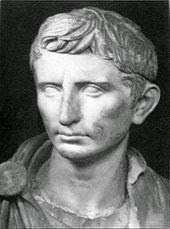 After the death of Julius Caesar, Civil War broke out in Rome.  Mark Antony made an alliance with Cleopatra to dominate Rome from Egypt.  Both Mark Antony and Cleopatra were killed. 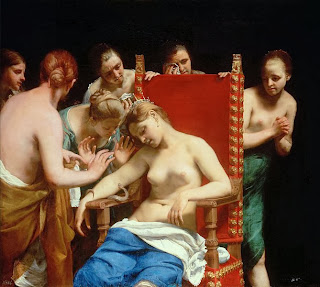 The Death of Cleopatra by Guido Cagnacci, 1658

The next big question is what happened to Cleopatra's children.  She had Caesarion with Julius Caesar, and she had 3 children with Mark Antony.  History records that Octavius had Caesarion killed and took in the other 3 children of Cleopatra (Alexander Helios
Cleopatra Selene, Queen of Mauretania and
Ptolemy XVI Philadelphus.). 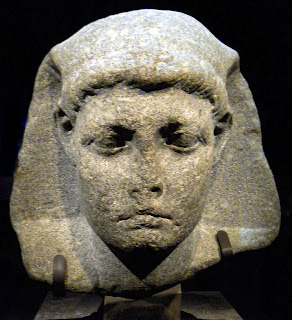 Caesarion, from the "Unravel the Mystery" Cleopatra exhibit

Alexander Helios was born and educated in Alexandria. He was the second oldest of Cleopatra's sons, Caesarion being the oldest. In late 34 BC, at the Donations of Alexandria, he was given the title of "King of Kings". His parents also made him ruler of Armenia, Media, Parthia and any countries yet to be discovered between the Euphrates and Indus Rivers, despite the fact that most of this territory stood outside of their control at that time.[3] These areas were, in fact, already ruled by Artaxias II of Armenia (who had been elected King that same year after Antony captured his father Artavasdes II), Artavasdes I of Media Atropatene and Phraates IV of Parthia. In 33 BC, Alexander was engaged to his distant relative Iotapa,[4] a Princess of Media Atropatene and daughter of Artavasdes I. However, Mark Antony and Cleopatra were defeated by Octavian at the Battle of Actium in 31 BC. The next year, they committed suicide as Octavian and his army invaded Egypt. Iotapa left Egypt to return to her father and later married her maternal cousin King Mithridates III of Commagene, who was of Armenian and Greek descent.[5]

When Octavian conquered Egypt, he spared Alexander, but took him, his sister and his brother Ptolemy Philadelphus from Egypt to Rome. Octavian celebrated his military triumph in Rome by parading the children in heavy golden chains in the streets behind an effigy of their mother clutching an asp to her arm. It is unclear whether Ptolemy Philadelphus survived the journey to Rome, as Cassius Dio only mentions the twins in his History of Rome.[6] Octavian gave the children to Octavia Minor, his elder sister and a former wife of Mark Antony, to be raised under her guardianship in Rome. They were generously received by Octavia, who educated them with her own children.[7]

What happened to the boys of Cleopatra VII?  Where are their bodies buried?  We know where the daughter of Cleopatra is buried.  Her body, along with King Juba II are still laid to rest in a mound in Algeria. 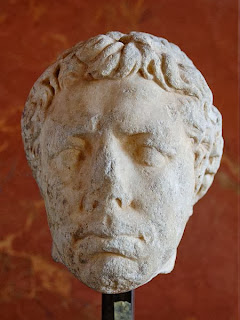 The children of Cleopatra and Juba were:

Queen of Syria, Zenobia of Palmyra claimed descent from Cleopatra, although this is unlikely.[8] 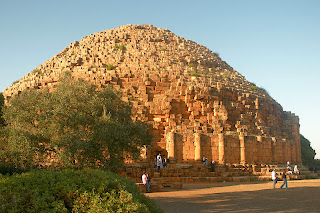 The tomb of Juba II and his wife in Tipaza, Algeria

Now, much turmoil occurred when Julius Caesar aligned with Cleopatra and then was assassinated.  Rome could have been taken over by Egypt if Cleopatra and Mark Antony, survived.  Those 3 boys of Cleopatra would have been rivals to Octavius.  He was evil for parading the twins in chains back to Rome with a statue of their dead mother in front.  But there is no evidence of the death of these boys, nor are there any grave indicators.  Per my research into calendar systems, the current Julian-Gregorian calendar was created in honor of  Caesarion.  We still use that calendar and to my knowledge there is no year zero, nor is there an exact date given for the birth of "Jesus Christ."

According to Doggett, "Although scholars generally believe that Christ was born some years before AD 1, the historical evidence is too sketchy to allow a definitive dating".[32] According to Matthew 2:1[33] King Herod the Great was alive when Jesus was born, and Matthew 2:16,[34] says Herod ordered the Massacre of the Innocents in response to Jesus' birth. Blackburn and Holford-Strevens fix King Herod's death shortly before Passover in 4 BC[11]:770, and say that those who accept the story of the Massacre of the Innocents sometimes associate the star that led the Biblical Magi with the planetary conjunction of 15 September 7 BC or Halley's comet of 12 BC (less likely since comets were usually considered bad omens); even historians who do not accept the Massacre accept the birth under Herod as a tradition older than the written gospels.[11]:776

The Gospel of Luke states that Jesus was conceived during the reign of Herod the Great[Luke 1:5-38] (i.e., before 4 BC) while also stating that Jesus was born when Cyrenius (or Quirinius) was the governor of Syria and carried out the census of the Roman provinces of Syria and Iudaea.[Luke 2:1-3] The Jewish historian Josephus, in his Antiquities of the Jews (ca. AD 93), indicates that Cyrenius/Quirinius' governorship of Syria began in AD 6, and that the census occurred sometime between AD 6–7,[35] which is incompatible with a conception prior to 4 BC. On this point, Blackburn and Holford-Strevens state that "St. Luke raises greater difficulty ... Most critics therefore discard Luke".


Could Jesus Christ have been one of those sons of Cleopatra VII?

Ptolemy XV Philopator Philometor Caesar[note 1] (Greek: Πτολεμαῖος ΙΕʹ Φιλοπάτωρ Φιλομήτωρ Καῖσαρ, Ptolemaios IEʹ Philopatōr Philomētōr Kaisar; Latin: Ptolemaeus XV Philopator Philomētor Caesar; June 23, 47 BC – August 23, 30 BC), better known by the nicknames Caesarion (/sɨˈzæriən/; Greek: Καισαρίων, Kaisariōn, literally "little Caesar"; Latin: Caesariō) and Ptolemy Caesar (/ˈtɒlɨmi ˈsiːzər/; Greek: Πτολεμαῖος Καῖσαρ, Ptolemaios Kaisar; Latin: Ptolemaeus Caesar), was the last king of the Ptolemaic dynasty of Egypt, who reigned jointly with his mother Cleopatra VII of Egypt, from September 2, 47 BC. Between the death of Cleopatra, on August 12, 30 BC, up to his own death on August 23, 30 BC, he was nominally the sole pharaoh. He was killed on the orders of Octavian, who would become the Roman emperor Augustus. He was the eldest son of Cleopatra VII, and possibly the only son of Julius Caesar, after whom he was named.


Caesarion was proclaimed a god, son of god[disputed – discuss] and "King of Kings". This grandiose title was "unprecedented in the management of Roman client-king relationships" and could be seen as "threatening the 'greatness' of the Roman people".[2] Most threatening to Octavian (whose claim to power was based on his status as Julius Caesar's grandnephew and adopted son), Antony declared Caesarion to be Caesar's true son and heir. These proclamations, known as the Donations of Alexandria, caused a fatal breach in Antony's relations with Octavian, who used Roman resentment over the Donations to gain support for war against Antony and Cleopatra.[3]