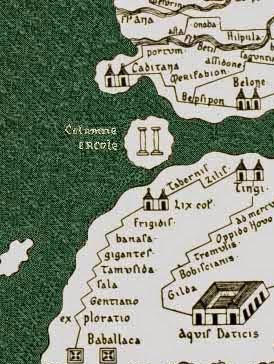 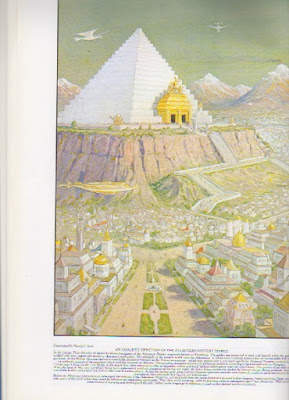 
Manly P Hall refers to Atlantis in his book, The Secret Teachings of All Ages. In it he writes:

Diodorus Siculus (/?da???d??r?s ?s?kj?l?s/; Greek: Δι?δωρος Σικελι?τηςDiodoros Sikeliotes) or Diodorus of Sicily was a Greekhistorian. He is known for writing the monumental universal historyBibliotheca historica, much of which survives, between 60 and 30 BC. It is arranged in three parts. The first covers mythic history up to the destruction of Troy, arranged geographically, describing regions around the world from Egypt, India and Arabia to Greece and Europe. The second covers the Trojan War to the death of Alexander the Great. The third covers the period to about 60BC. The title Bibliotheca, meaning ‘library’, acknowledges that he was drawing on the work of many other authors.

Plato (/?ple?to?/;[1]Greek: Πλ?τωνPlát?n “broad”pronounced [plá.t??n] in Classical Attic; 428/427 or 424/423 – 348/347 BC) was a philosopher and mathematician inClassical Greece, and the founder of the Academy in Athens, the first institution of higher learning in the Western world. He is widely considered the most pivotal figure in the development of philosophy, especially the Western tradition.[2]Unlike nearly all of hisphilosophical contemporaries, Plato’s entire oeuvre is believed to have survived intact for over 2500 years, and he is arguably one of the greatest, if not the greatest, writer in the entire Western canon.[3][4]

From Plato’s writing, we see a description of Atlantis:

At that time, as we said, Atlantis was an island larger than Libya and Asia put together, though it was subsequently over whelmed by earthquakes and is the source of the impenetrable mud which prevents the free passage of those who sail out of the straits into the open sea.  - Plato, Timaeus and Critias, page 131.