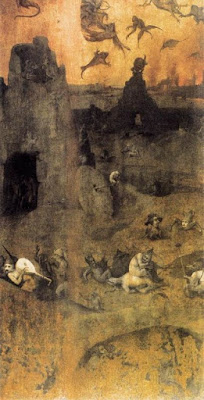 The Fall of the Rebel Angels by Hieronymus Bosch is based on Genesis 6:1–4 – Wikpedia – public domain 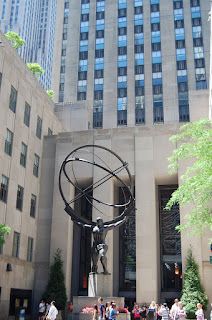 Baraqiel, Barâqîjâl, Baraqel (Aramaic: ?????, Greek: Βαρακι?λ) was the 9th Watcher of the 20 leaders of the 200 fallen angels that are mentioned in an ancient work called the Book of Enoch. The name means “lightning of God”,[1] which is fitting since it has been said that Baraqiel taught men astrology during the days of Jared or Yered. Some scholars believe that he is Sanat Kumara of theosophists such as Benjamin Creme and Madame Blavatsky; others believe that Sanat Kumara is a separate being.

It has also been proposed based on a reconstruction by Schniedewind and Zuckerman that Baraqiel was the name of the father of Hazael, mentioned in the 9th century BCE inscription from Tel Dan. The biblical figure, Barak, known from Judges 4 is a shortened version of this longer name.[2]

https://en.wikipedia.org/wiki/Baraqiel
Per the Ethiopian Book of Enoch:

In those days, when the children of man had multiplied, it happened that these were born unto them handsome and beautiful daughters. And of the angels, the children of heaven, saw them and desired them; and they said to one another, “Come, let us choose wives for ourselves from among the daughters of man and beget us children.” And Semyas, being their leader, said unto them, “I fear that perhaps you will not consent that this deed should be done, and I alone will become (responsible) for this great sin.” But they all responded to him, “Let us all swear an oath and bind everyone among us by a curse not to abandon this suggestion but to do the deed.” Then they all swore together and bound one another by (the curse). And they were altogether two hundred; and they descended into Ardos, which is the summit of Hermon. And they called the mount Armon for they swore and bound one another by a curse. And their names are as follows: Semyas, the leader of Arakeb, Rae’el, Tam’el, Ram’el, Dan’el, Ezequel, Baraqyal, As’el, Armoaros, Batar’el, Anan’el, Zage’el, Sasomasp e’el, Kestar’el, Tur’el, Yamayol, and Arazyal. These are their chiefs of tens and of all the others with them.

And Azaz’el taught the people (the art of ) making swords and knives, and shields, and breastplates; and he showed to their chosen ones bracelets, decorations, (shadowing of the eye) with antimony, ornamentation, the beautifying of the eyelids, all kinds of precious stones, and all coloring tinctures and alchemy.  And there were many wicked ones and they committed adultery and erred, and all their conduct became corrupt.  Amasras taught incantation and the cutting of roots; and Armaros the resolving of incantations; and Baraqiyal astrology, and Korare’el (the knowledge of) the signs, and Tam’el taught the seeing of the stars, and Asder’el taught the course of the moon as well as the deception of man.  And (the people) cried and their voice reached unto heaven.
– James H. Charlesworth, The Old Testament Pseudepigrapha, Book of Enoch, page 15-16.

There are variations in the 3 versions of the Book of Enoch.  The name for the watcher teaching astrology is Baraqiyal in the Ethiopian version.  Semyaz was their leader.
Now let’s compare this story of the Watchers and God to the story of Zeus and his war against the giants:

Zeus also had other wars against the Giants, we are told in Macedonia near Pallene and in Italy on the plain which of old was named Phlegraen (“fiery”) after the region about it which had been burned, but which in later times men called Cumaean.

Now the Giants were punished by Zeus because they had treated the rest of mankind in a lawless fashion and, confiding in their bodily superiority and strength, had enslaved their neighbours, and because they were also disobeying the rules of justice which he was laying down and were raising up war against those whom all mankind considered to be gods because of the benefactions, they were conferring upon men generally.  Zeus, then we are told, not only totally eradicated the impious and evil-doers from among mankind, but he also distributed honours as they were merited among the noblest of the gods and heroes and men.  And because of the magnitude of his benefactions and his superior power all men accorded to him as with one voice both the everlasting kingship which he possess and his dwelling upon Mount Olympus. - Diodorus Siculus, Library of History, Volume 3, Page 291.

Let’s also compare the story of the Watchers to the story of Iapetus (also known as Atlas and named a son after himself) and Cronus as written about by Sanchoniathon:

After these events Cronus builds a wall round about his habitation, and found Byblus, the first city of Phoenicia.  Afterwards Cronus suspecting his own brother Atlas, by the advice of Hermes threw him into a deep cavern in the earth, and buried him. – Isaac Preston Cory, Sanchuniathon History of the Ancient World, page 10.

More is revealed by Diodorus Siculus:

After the death of Hyperion, the myth relates the kingdom was divided among the sons of Uranus, the most renowned of whom were Atlas and Cronus. Of the sons Atlas received as his part the regions of the coast of the ocean, and he not only gave the name of Atlantians to his people but likewise called the greatest mountain in the land Atlas. They also say that he perfected the science of astrology and was the first to publish to mankind the doctrine of the sphere; and was for this reason that the idea was held that the entire heavens were supported upon the shoulders of Atlas, the myth darkly hinting in this way at his discovery and description of the sphere.  – Diodorus Siculus, Library of History, Book 2, Page 279.

In this case Hermes would be Thoth and not the son of Zeus. It is clear that Zeus had a war with the giants and cleaned the Earth of them, but it is not clear whether Cronus started it by killing his brother who taught the forbidden science of astrology and other forbidden knowledge to the humans just as the leader of the fallen angels, Shemjaza, and his comrades did. I tend to think this is how the rebellion of the Watchers started.