More from Diodorus Siculus' The Library of History

The Giants once again - Perhaps a different human species or just humans with genetics for tall stature and/or Gigantism with a height and weight advantage over normal sized humans:
"Furthermore, the Egyptians relate in their myths that in the time of Isis there were certain creatures of many bodies, who are called by the greeks Giants, but by themselves...., these being the men who are represented on their temples in monstrous form and as being cudgelled by Osiris." Diodorus Siculus, The Library of History, Volume 1, page 85.
From Wikipedia - The Narmer Palette: The Cronide timeline is old. The Trojan War was not so long ago and Diodorus Siculus addresses timeline issues in mythology by stating that Heracles did not live during the Trojan War time period, but at a longer time before it:
----------------------------------------
"The account of the Egyptians agrees also with the tradition which has been handed down among the Greeks since very early times, to the effect that Heracles cleared the earth of wild beasts, a story which is in no way suitable for a man who lived in approximately the period of the Trojan War, when most parts of the inhabited world had already been reclaimed from their wild state by agriculture and over the land. Accordingly this reclamation of the land suits better a man who lived in early times, when men were still held in subjection by the vast numbers of wild beasts, a state of affairs which was especially true in the case of Egypt, the upper part of which is to this day desert and infested with wild beasts." - Diodorus Siculus, The Library of History, Volume 1, page 79.
From Wikipedia:
The fight of Heracles and the Nemean lion is one of his most famous feats. 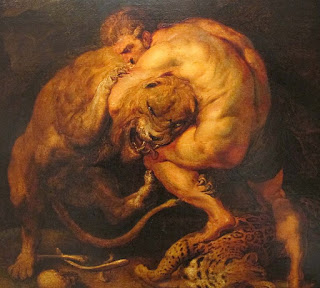 The Timeline (12,000 to 25,000 years ago). I use this information along with some other things to put the date between 15,000 to 19,000 years ago per my analysis:
"The number of years from Osiris and Isis, they say, to the reign of Alexander, who founded the city which bears his name in Egypt, is over ten thousand, but according to other writers, a little less than twenty-three thousand." - Diodorus Siculus, The Library of History, Volume 1, page 73.

The evidence of Dionysus-Osiris in India still has to be there. If you are Indian and you know of this, please write to me:
"Osiris also took an interest in hunting elephants, and everywhere left behind him inscribed pillars telling of his campaign. And he visited all the other nations of Asia as well and crossed into Europe at the Hellespont." - Diodorus Siculus, The Library of History, Volume 1, page 63.
Here is a link of a children's story about Krishna killing an elephant:
http://www.kidsgen.com/…/ind…/krishna_kills_the_elephant.htm

More evidence that Osiris-Dionysus is also Krishna:
"He also founded not a few cities in India, one of which he named Nysa, wishing to leave there a memorial of the city in Egypt where he had been reared. He also planted ivy in the Indian Nysa, and throughout India and those countries which border upon it the plant to this day is still to be found only in this region. And many other signs of his stay he left in that country, which have led the Indians of a later time to lay claim to the god and say that he was by birth a native of India." - Diodorus Siculus, The Library of History, Volume 1, page 63.

The Cronides traveled together (Again more evidence of my Mythological Unification Theory):
"Now after Osiris had established the affairs of Egypt, and turned the supreme power over to Isis his wife, they say that he placed Hermes at her side as counsellor because his prudence raised him above the king's other friends, and as general of all the land under his sway he left Heracles, who was all the land under his sway he left Heracles, who was both his kinsman and renowned for his valour and physical strength, while as governors he appointed Busiris over those parts of Egypt which lie towards Phoenicia and border upon the sea and Antaeus over those adjoining Ethiopia and Libya; then he himself left Egypt with his army to make his campaign, taking in his company also his brother, who the Greeks call Apollo. And it was Apollo, they say, who discovered the laurel, a garland of which all men place about the head of this god above all others." - Diodorus Siculus, The Library of History, Volume 1, page 55 -57.

"Of Osiris they say that, being eager for glory, he gathered together a great army, with the intention of visiting all the inhabited earth and teaching the race of men how to cultivate the vine and sow wheat and barley; for he supposed that if he made men give up their savagery and adopt a gentle manner of life he would receive immortal honours because of the magnitude of his benefactions. And this did in fact take place, since not only the men of his time who received this gift, but all succeeding generations as well, because of the delight which they take in the foods which were discovered, have honoured those who introduced them as gods most illustrious." Diodorus Siculus, The Library of History, Volume 1, page 55.

Osiris, they say, founded in the Egyptian Thebaid a city with a hundred gates, which the men of his day named after his mother, though later generations called it Diospolis, and some named it Thebes." Diodorus Siculus, The Library of History, Volume 1, pages 49 -51.

The Meaning of the Pentagram

The Pentagram has been vilified due to Abrahamic Religion.  Abrahamic Religion is a fraud.  It is the cult of Jupiter Sabazius as I have proved out.  That means a cult involving the Cronide family (Cronus, Zeus, Prometheus, Dionysus, Ashtoreth, etc.).  The knowledge of the ancestors was wiped out and kept hidden, scattered in esoteric libraries.  Here is the background of the pentagram: