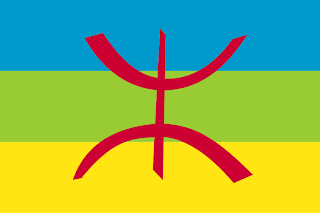 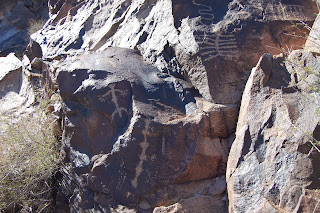 My photograph of petroglyph at Sloan Canyon in Nevada
with character similar to the Berber Yaz (in the middle of the dark rock)
.

The yaz symbolizes the "free man", which is the meaning of the Berber word amazigh, the Berbers' own name for themselves. It is in red, the colour of life, and also the colour of resistance.

The Berber flag thus symbolizes the entire Amazigh people, living in harmony with their land, Tamazgha.

The Berbers of North Africa are an ancient African Caucasoid people.  I believe they are related to the Cronide bloodline and the ancient Atlantians.  Specifically, the blood of Cronus' brother Iapetus and his descendants.  The Atlas mountains in North Africa that stretch across the countries of Algeria, Morocco, and Tunisia were named after Iapetus' son, Atlas, who was the brother of Prometheus.

The women of the Berbers wear a wedding headdress similar to the Lady of Baza's headgear. 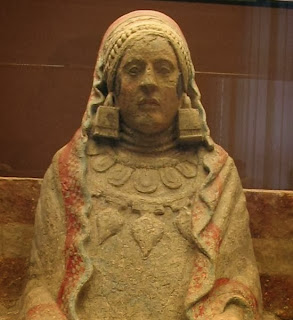 I believe Iapetus, his son Atlas, and others were murdered by Cronus and his followers after there were suspicions were raised about their activities.  Those that follow my radio show, will understand further. 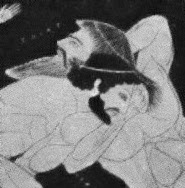 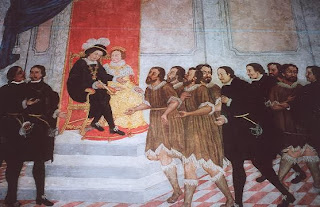 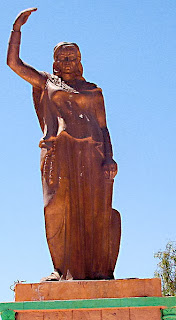 These people have had to endure attack after attack.  First the Spanish attacked the Berber Guanches and then the Muslims came in.  From Wikipedia:

After the Muslim conquest, the Berber tribes of coastal North Africa became almost fully Islamized. Besides the Arab influence, North African population also saw an influx via the Barbary Slave Trade of European peoples, with some estimates placing the number of European slaves brought to North Africa during the Ottoman period as high as 1.25 million.[29] Interactions with neighboring Sudanic empires, traders, and nomads from other parts of Africa also left impressions upon the Berber people.﻿

The Berbers have mixed with the Arabs and Black Africans but many still remain tribal. 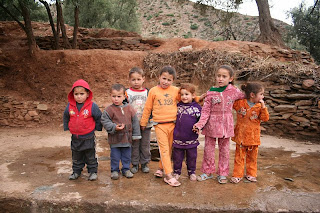 The Berber people are still under attack.  From Wikipedia:

Political tensions have arisen between some Berber groups (especially the Kabyle) and North African governments over the past few decades, partly over linguistic and cultural issues; for instance, in Libya and Morocco, giving children Berber names was banned. The regime of Muammar Gaddafi in Libya also banned the teaching of Berber languages, and the dictator warned Berber leaders in a 2008 diplomatic cable leaked by WikiLeaks "You can call yourselves whatever you want inside your homes – Berbers, Children of Satan, whatever – but you are only Libyans when you leave your homes."[49] As a result of the persecution suffered under Gaddafi's rule, many Berbers joined the Libyan opposition in the 2011 Libyan civil war. 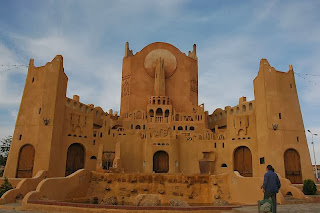 The story of Iapetus is as follows:

Iapetus ("the Piercer") is the one Titan mentioned by Homer in the Iliad (8.478–81) as being in Tartarus with Cronus. He is a brother of Cronus, who ruled the world during the Golden Age. His name derives from the word iapto ("wound, pierce") and usually refers to a spear, implying that Iapetus may have been regarded as a god of craftsmanship, though scholars mostly describe him as the god of mortality.

Iapetus' wife is normally a daughter of Oceanus and Tethys named Clymene or Asia.

In Hesiod's Works and Days Prometheus is addressed as "son of Iapetus", and no mother is named. However, in Hesiod's Theogony, Clymene is listed as Iapetus' wife and the mother of Prometheus. In Aeschylus's play Prometheus Bound, Prometheus is son of the goddess Themis with no father named (but still with at least Atlas as a brother). However, in Horace's Odes, in Ode 1.3 Horace describes how "audax Iapeti genus/ Ignem fraude mala gentibus intulit"; "The bold offspring of Iapetus [i.e. Prometheus]/ brought fire to peoples by wicked deceit".

Iapetus has (for example, by Robert Graves)[2] been equated with Japheth (יֶפֶת), the son of Noah, based on the similarity of their names and on old Jewish traditions, that held Japheth as the ancestor of the Greeks, the Slavs, the Italics, the Teutons, the Dravidians etc. (see Josephus, Antiquities of the Jews). Iapetus was linked to Japheth by 17th-century theologian Matthew Poole[3] and more recently by John Pairman Brown.[4] Similarly, Ham, son of Noah, was equated with "Jupiter Ammon", i.e. the Egyptian god Amun.[5][6]


In Greek mythology, Iapetus /aɪˈæpɪtəs/,[1] also Iapetos or Japetus (Ancient Greek: Ἰαπετός), was a Titan, the son of Uranus and Gaia, and father (by an Oceanid named Clymene or Asia) of Atlas, Prometheus, Epimetheus, and Menoetius.

Atlas and his brother Menoetius sided with the Titans in their war against the Olympians, the Titanomachy. When the Titans were defeated, many of them (including Menoetius) were confined to Tartarus, but Zeus condemned Atlas to stand at the western edge of Gaia (the Earth) and hold up Uranus on his shoulders, to prevent the two from resuming their primordial embrace. Thus, he was Atlas Telamon, "enduring Atlas," and became a doublet of Coeus, the embodiment of the celestial axis around which the heavens revolve.[9]

Iapetus and his sons were killed by Cronus and his sons in my opinion.  The Berbers also have face tattoos that are very similar to ancient American Southwestern petroglyphs.

Popular posts from this blog

I don’t know if this is real or not, but the fact that this is online and the owners list their faces and names, makes me think it is. This restaurant claims to serve human flesh from “young and healthy” “people” to Hollywood’s elite.  Here is a screenshot: This club claims to serve human flesh from “young and healthy” people.  Where are they getting these bodies from and who gave them permission to do this? C ollaborating with visiting cooks from around the world, Chef de Cuisine Sophie Laffite regularly updates our menu with new and daring culinary experiments. The meat we serve is selected from the young and healthy. Consistent with the practice of cannibalism in many primitive societies, we view anthropophagy as homage to the dead, who are reborn into the bodies of their consumers. Each dish, therefore, is a study in taste and elegance. It appears there are no precise laws against cannibalism in America but there are other laws of body desecration and murder that t
Read more

I can’t believe where my simple research on Mythology for my Children’s books has taken me. I never thought I would have to be dealing with some of the most depraved practices of the human race. But if you don’t understand and rise up against this filth, you will remain a slave forever to these depraved specimens of humanity. The lowest forms of “magick” involve spell casting, sigils, candles, and small items of sacrifice or offering to dead disincarnate entities.  The next level of depravity involves something called sex magic/orgies. The elite get off on it and will sometimes call entities into their bodies (called invocation) so that these entities can enjoy the sensations of sexual contact.
Read more

The identity of Jesus Christ is an area I am researching extensively.  Where is the written record of him, other than the bible?  Before we can answer this question, let's take a look at something that was occurring near the "time" of his life.  It was the power struggle between Rome and Egypt.  Cleopatra VII and Caesarion were the last Pharaohs of Egypt.   Julius Caesar was the father of Caesarion.   Here is what they all looked like according to ancient art: Bust of Cleopatra VII, Altes Museum , Berlin
Read more